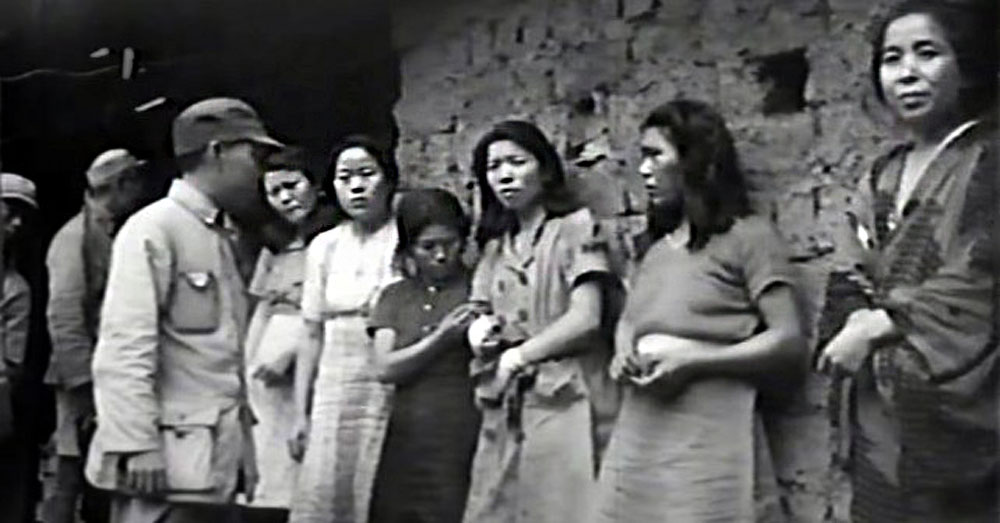 What can we know of the lives of young women in a fragment of old 35mm film (screen capture above), women who suffered terribly, were old themselves by 20 or 25 because of what was done to them, and then dropped out of sight forever?

On 5 July a South Korean research team reported the discovery of the first ever film footage of 'Comfort Women'—the sexual slaves of the Imperial Japanese Army in World War II. The 18-second clip, shot by the U.S. 16th Signal Photo Company at Songshan, China on 8 September 1944, was presented at a news conference in Seoul. It captures seven nervous, bare-footed women being interrogated by a Chinese officer. 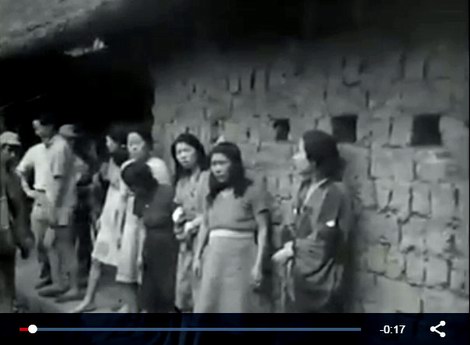 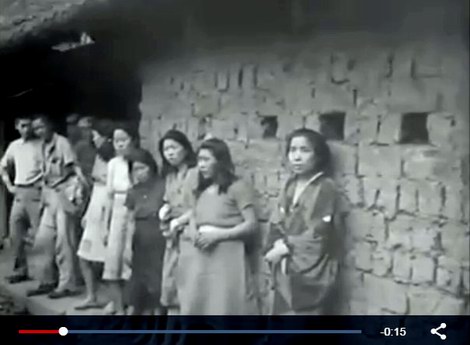 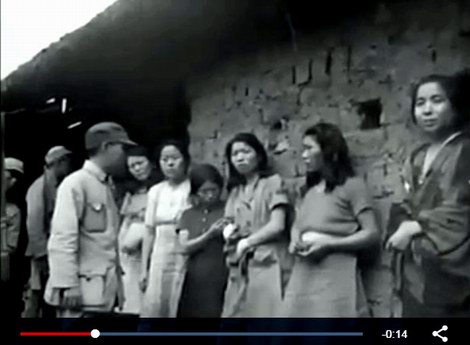 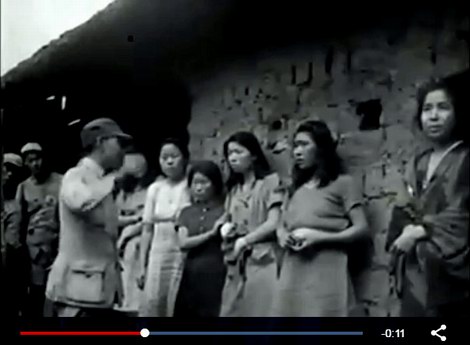 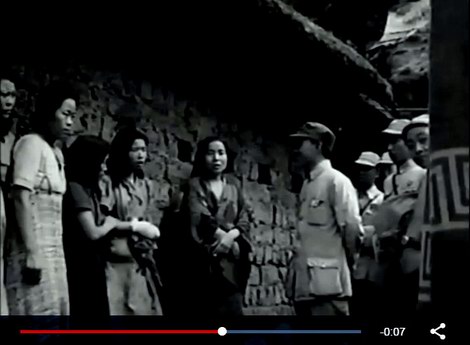 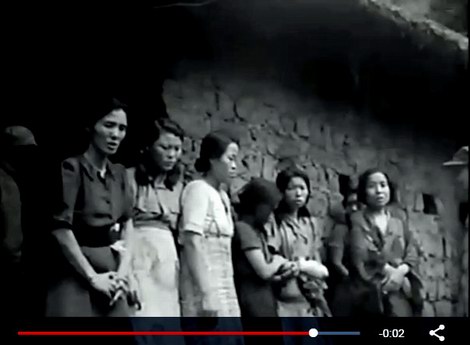 Footage at 15 seconds
Return to top of page

Although there exists a list of names with corresponding ages, nationalities, and places of origin for the ten 'Comfort Women' captured by Chinese Nationalist forces at Songshan, none of those who appear in the film have been identified.

The footage is important in showing what, until now, has largely remained 'unseen': although Japan's extensive 'Comfort Women' system lasted from 1932 to 1945 and involved an estimated 200,000 duped or forcefully abducted Korean, Chinese, Filipino, and other women from across the Japanese empire, there are but a handful of photographs of the victims. The Japanese military was systematic in destroying evidence of its crimes.

What is particularly exciting about this discovery is that it connects directly with a few contemporaneous Signal Photo Company photographs of the same women, as well as information gathered by a United Press journalist at Songshan. It is a unique case of overlapping evidence.

The vast majority of the 'Comfort Women' left no traces of their mostly brief and miserable lives; due to a historical accident, the seven in the film left several. In what follows I use four photographs to give attention to those traces. 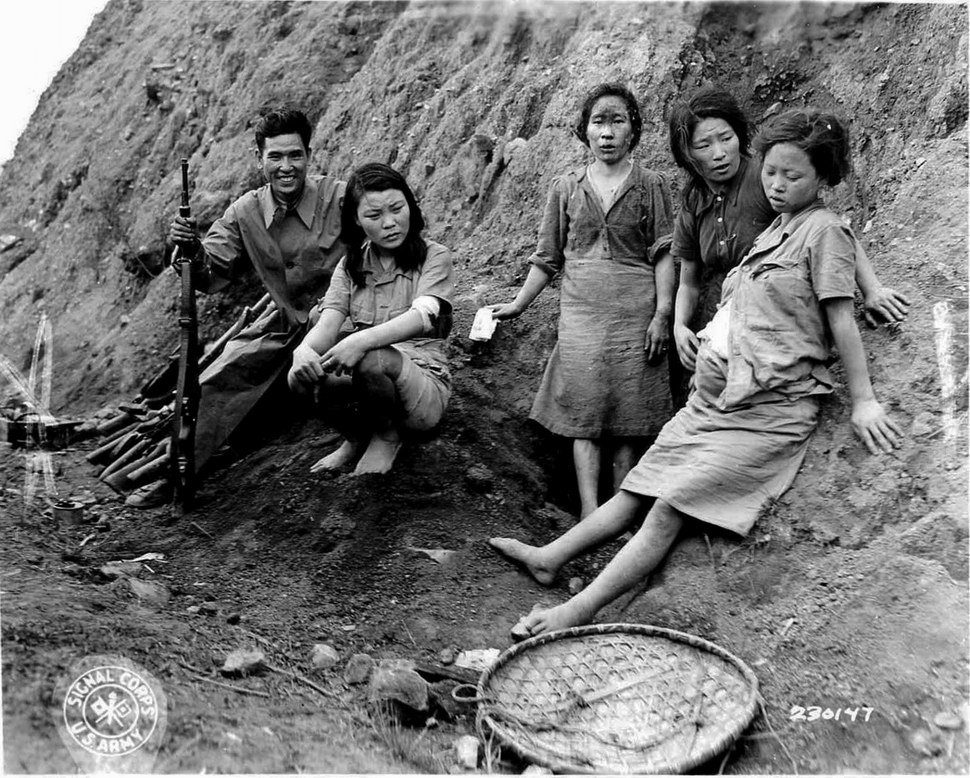 Despite what the caption says, these women are probably Korean (eight of the 10 women captured at Songshan were Korean, two Japanese). The woman with the bandage on her elbow beside the Chinese soldier, and the one second from the right, both appear in the film. They seem fairly strong in the photograph, but are among the most fragile-looking in the film.

The central figure holding a handkerchief has a serious burn or bruise on her face that will almost certainly disfigure her for life.

The photograph was taken 14 days after Chinese forces detonated two massive TNT explosions beneath the Japanese mountain stronghold of Songshan. Those who survived the blasts were subsequently hunted down with artillery strikes, flame-throwers, and hand grenades.

Of the 1,200 Japanese forces dug in on Songshan Mountain when the battle began three months earlier, only a few dozen were still alive when this photo was taken. These women were probably hiding in the cave immediately behind the frontline and had just been captured. They had been told that if captured they would be tortured. 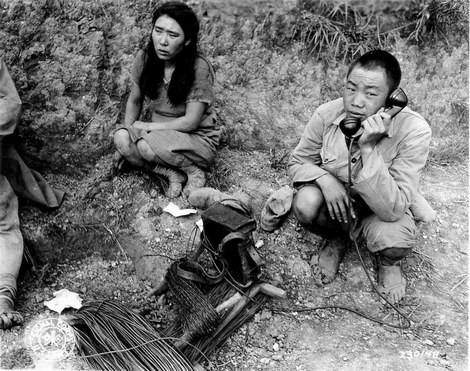 Original caption: A JAPANESE GIRL CAPTURED IN VILLAGE ON SUNG SHAN HILL BY TROOPS OF CHINESE 8TH ARMY. WHEN ALL JAP MEN WERE KILLED IN CAVE, THE CHINESE SOLDIERS FOUND THIS GIRL HIDING IN CORNER OF CAVE. CHINESE SOLDIERS CALLING ARMY HQS. TO TELL OF THE CAPTURE. 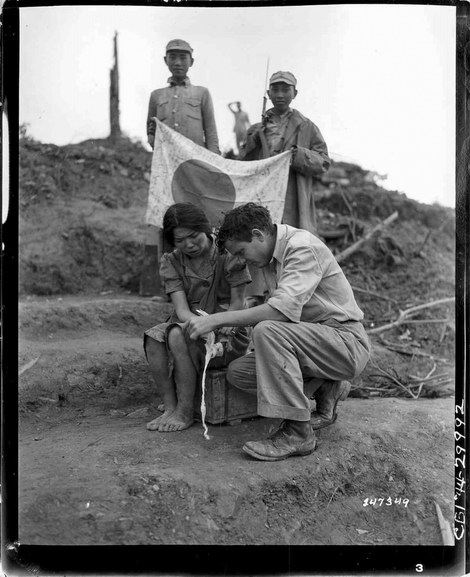 This woman also appears in the film. She is noteworthy there for her fear of the movie camera: near the end of the sequence she breaks ranks to hide behind one of her fellows. Another woman is also manifestly uncomfortable about being filmed and tries to remain off camera.

Five of the women reported later to American journalist Walter G. Rundle that they gave him false names so as to protect their families. It is significant that while the movement to secure proper compensation for the 'Comfort Women' has striven to identify as many of the victims as possible, their instinct at the time seems to have been to conceal their identities. 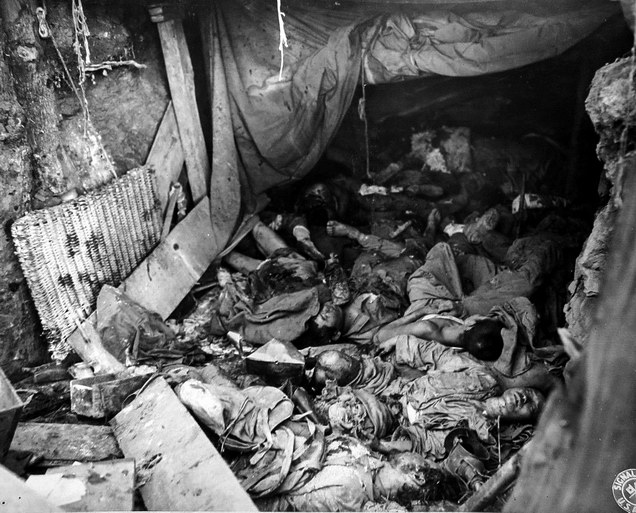 Original caption: NEAR VILLAGE AT SUNG SHAN HILL 15 DEAD JAPS INCLUDING TWO GIRLS IN CAVE WHERE ARTILLERY STRUCK AND IN WHICH TROOPS OF CHINESE 8TH ARMY THREW HAND GRENADES.

This photograph was taken on the final day of the battle. The commander of the garrison had been killed the day before and the last defenders had just slain the remaining wounded and burned their regimental colours. Despite her weak position here (the photograph shows her to be burned and bruised), this woman takes the lead in the filmed discussion with the Chinese officer the next day. Her strength there is particularly impressive given that she was found in the horrific circumstances shown in this photo.

At the beginning of the Battle of Songshan there were 24 'Comfort Women' attending to 1200 soldiers. The ratio of 1:50 attests to the brutality of their exploitation. Additionally, they washed, cooked, and cleaned for their captors while receiving no pay.

Defending Songshan was a suicide mission and no one could leave. In such circumstances the very survival of 10 women is remarkable. 100 km northwest, at Tengchong, 30 Korean women were shot by Japanese troops before the city fell to the Chinese liberators.

Even though several at Songshan escaped with their lives, at the time they were photographed their futures were uncertain. They were prisoners of war of a foreign army, 3,000 km from home, and completely dependent upon the kindness of strangers.

The only one from the group whose outcome is known is Park Young-shim, the pregnant woman in Photograph 1, who died in 2006.

In her testimony at the Tokyo Women's Tribunal in December 2000 Park indicated that after being interned in a POW camp she miscarried her baby, had her womb removed, and suffered a nervous breakdown.

She eventually made it back to present-day North Korea in 1946 with the help of a Chinese friend.

It is worth noting that when Park arrived at her hotel room in Tokyo for the Women's Tribunal, the sight of the complimentary kimono provided by the hotel was so upsetting that she was unable to proceed to the public testimonial. She had been forced to wear a kimono when providing sex to Japanese soldiers.

As of 28 August 2017 only 36 Korean former 'Comfort Women' remain alive, making it unlikely that those in the U.S. Signal Photo Company footage will ever be identified. 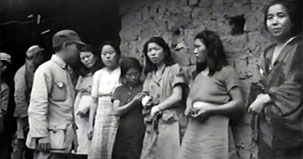 The above article is a combination of articles appearing in the University of Regina (Canada) website and the Korea Herald.

The original article 'Comfort Women' at Songshan, China, September 1944: A Picture Story, can be found here