Introduction to the old Burma Road.

Introduction to the old Burma Road.

Introduction to the old Burma Road

by combining existing roads and tracks and upgrading them for use by heavy transports and even building completely new roads and bridges. This all through an area in which till then hardly any roads had existed. The purpose of the road was to keep supplies coming in while the eastern sea ports of China were controlled or blocked by Japanese forces.

The road got closed off by the Japanese occupation of Burma and western Yunnan. Control over the road resulted in critical battles like the battle at the Huitong Bridge and the battle at Songshan Mountain in the Gaoligong mountain range.

in India across Burma to connect to the original Burma Road. The combined road got named "Stilwell road" after American General 'Vinegar Joe' Stilwell 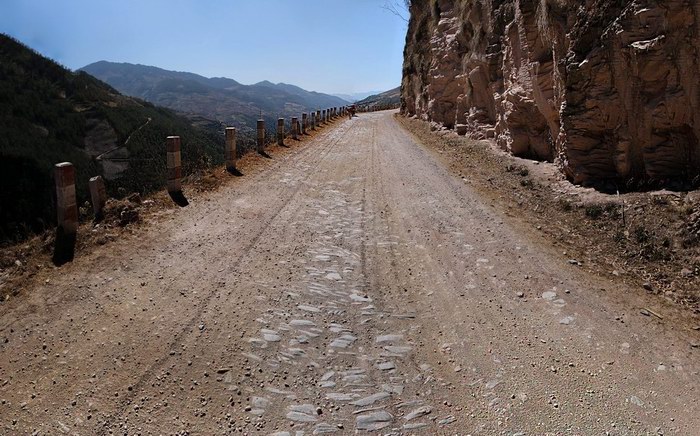 The old Burma Road passing one of the many mountain ranges in Western Yunnan.

The old Burma Road passing one of the many mountain ranges in Western Yunnan.
Return to top of page

At the turn of the century the British had attempted to extend their rail network from Lashio in Burma into Yunnan but had given up because the terrain was one of the hardest in the world with many mountains and big rivers to cross. The only east/west connection was the 'Southern Silk Road', a combination of footpaths and horse trails leading to footbridges and ferry crossings. The imminent occupation of Eastern China however necessitated a road to the west in order for China not to be cut off so work was started in 1937 on a new road to Burma.

The Burma Road was constructed by an unskilled local labour force of thousands recruited from the various tribes living along the route. The tools used were local farming tools and complicated constructions were avoided by letting the road hug the higher parts of the mountains and avoiding the valleys with rivers and streams as well as muddy flat lands as much as possible. Detail about the construction can be found in the book "The building of the Burma Road" by Tan Pei-Ying the Managing Director of the Yunnan-Burma Highway Engineering Administration. 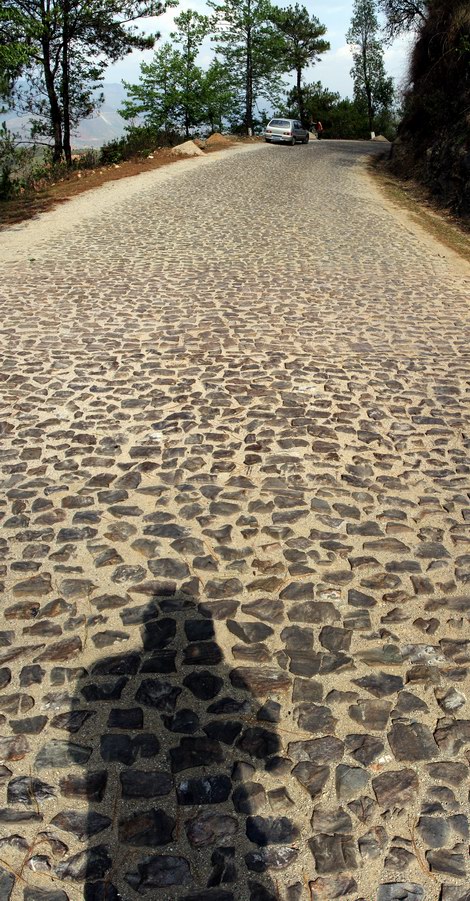 Finally the Burma road got an all-weather surface (Well some of it). 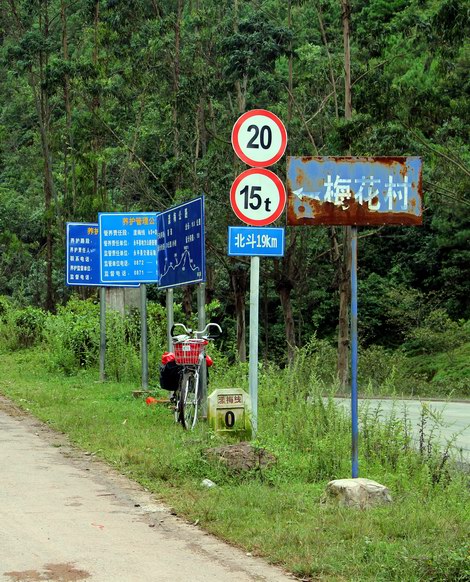 It takes skill to find the original road even when there are road signs.

Over the years the road got widened and paved with cobble stones but the road in its full length does not exist anymore as such. National road G320 incorporated parts of the old road and some parts got abandoned. Now the new G56 four to six lane motorway replaces the G320 again. This modern road with many bridges and tunnels, makes it possible to drive the entire length of the old Burma Road in one day. 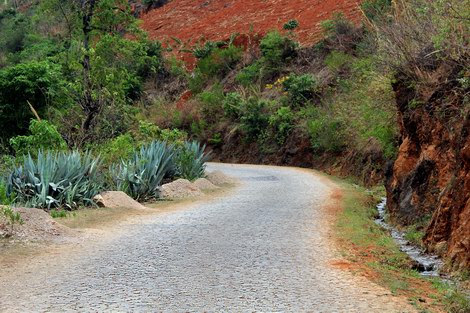 However there are still some original parts of the Burma Road that zigzag their way from Kunming to the border. All long distance traffic takes the motorway and local traffic takes the national road so those small stretches of abandoned road are nearly free of traffic and often lead through interesting landscapes. 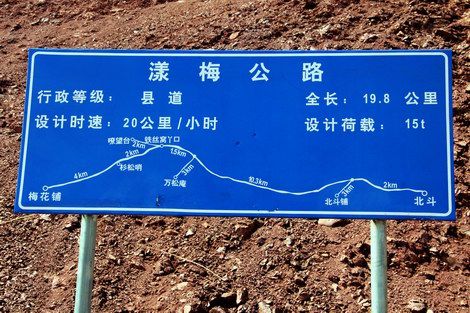 Also the sign does not indicate so this is part of the Burma Road. 19.8 Km of gravel track through the forest and mountains. Designed speed 20 Km/H. You will need a good four wheel drive to do that.

The remaining bits of Burma Road form a great way to travel for those who like to go off the motorway and travel the slow way and absorb the historic atmosphere of this road.

It takes however some skills to find the remaining original bits of road. They are hardly ever indicated as such and go through some rather remote area.

The old Burma Road is great for cycling as well but the road surface is a challenge. (And so are some parts of the G320. This road has been neglected and only recently gets refurbished). Another challenge are the 13 mountain ranges to be crossed of which the biggest have the worst road surface. 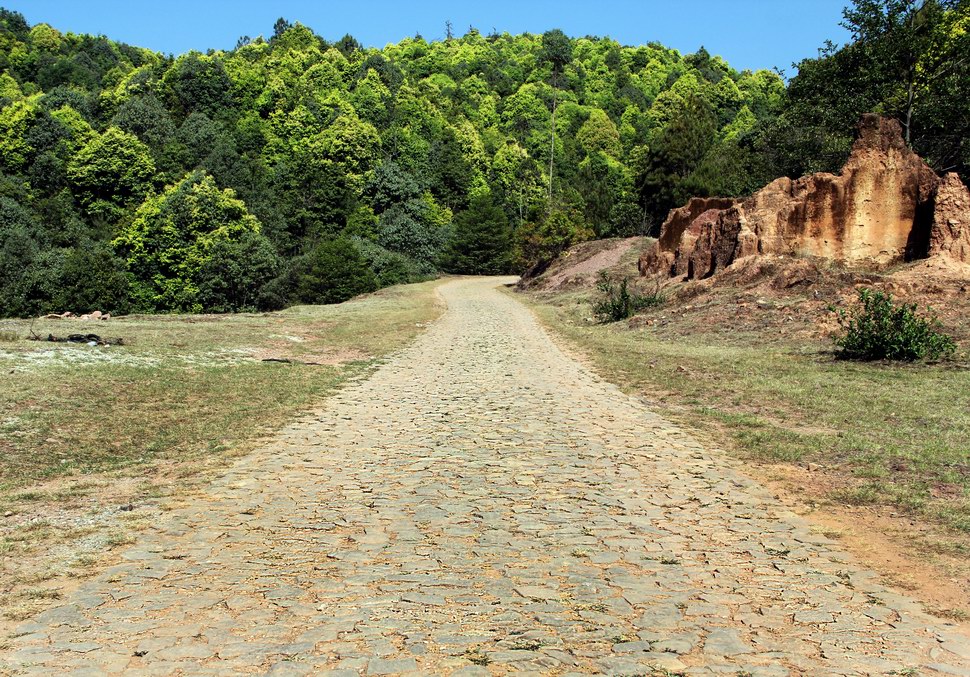 The road in the forest near Beidou with an abandoned rammed earth building. Hard to imagine that China had to be supplied via a road like this. 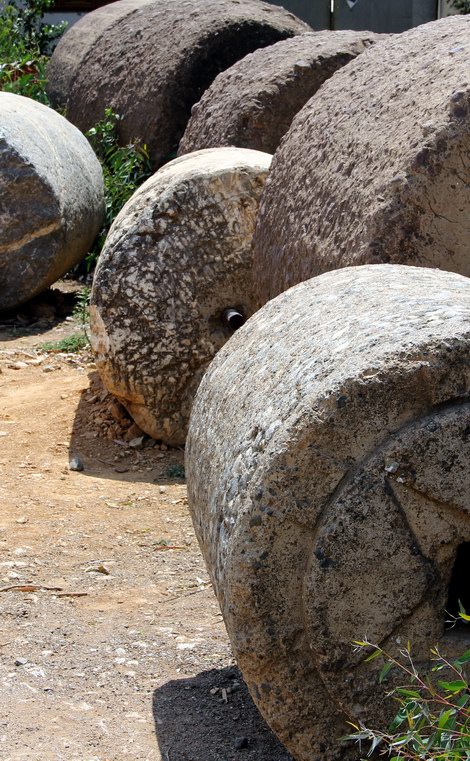 Heavy stone rollers used during the construction of the Burma Road are now used as monuments and can be found at various points along the road such as here at Yunnanyi where they were used as well to maintain the airstrip.

The Burma road was hastily constructed by connecting existing tracks and upgrading them in order to handle fully loaded trucks year round. Work was started in 1937 and the road was opened in 1938. A local labour force of up to 200,000 people was recruited out of the local minority tribes living in the area; people who often had never seen any motorised transport before in their life. 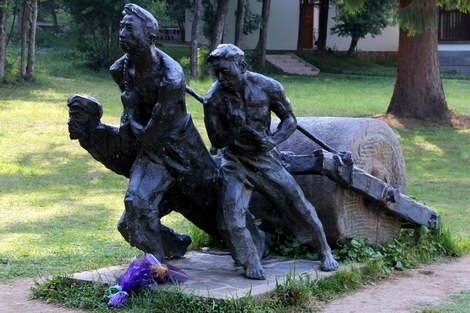 Monument in Tengchong to honour the hard work done by the local population to construct the Burma Road. In reality in required much more than three strong guys to move these heavy rollers.

After the road had been opened, work had to continue to improve and restore the road. Critical parts washed out during the rainy season and had to be built over and over again. Upgrading the bridges was needed in order to upgrade the capacity of the road. At first loads had to be hand carried across the iron chain bridge at Gongguo or ferried across truck by truck. In 1938 that bridge got upgraded and in 1940 a new bridge with a ten ton capacity was completed.

This drawing of a large labour force pulling a roller is more realistic than the three strong guys above.
Return to top of page 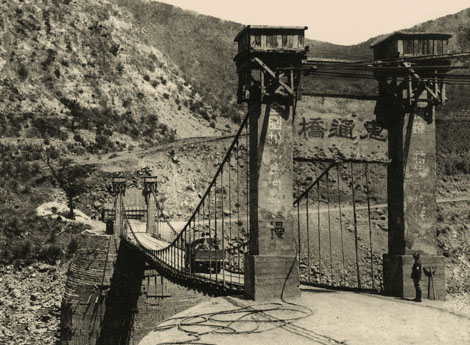 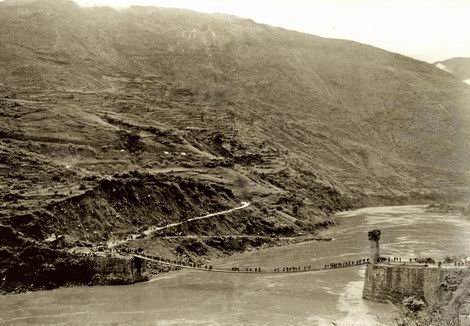 The improvised Huitong Bridge seen from the West bank in 1944. The blown Eastern bridgehead is still missing and there are no overhead cables thus the bridge can only handle limited traffic. (©2) 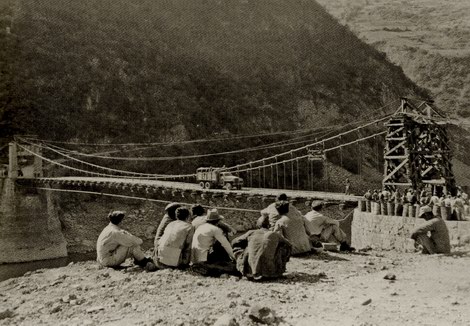 The fixed Huitong Bridge seen from the East bank in 1945. The blown Eastern bridgehead has been rebuilt and the bridge can handle fully loaded trucks again. Note the fuel pipeline hanging under it. (©2)

The Burma Road functioned as supply line till the Japanese forces invaded and overran Burma in 1942. The Huitong Bridge crossing the Nujiang (Salween) and the Gongguo Bridge, crossing the Lanchangjiang (Mekong) were on many occasions the target of aerial bombardments. The American Volunteer Group, better known as the "Flying Tigers", moved over the Burma Road to Kunming in December 1941 just before the road was closed off by Japanese Army units fighting their way up. The Japanese made it till the Huitong Bridge that crosses the Nujiang River (Salween). The Chinese commander stopped them by blowing up the bridge when he suspected that Japanese soldiers tried to come across dressed as refugees. The Flying Tigers tried to stop the Japanese by bombing the road and cause landslides and strafing Japanese military transports.

The river stayed the frontline and the farthest point of Japanese infiltration in western Yunnan.

With the road cut off the allied had no other option than to airlift their supplies across the mountains from India to Kunming. This got known as flying "the Hump". One of the most dangerous air routes due to the high mountains, the often very bad weather and the Japanese control of much of the air space.

The American General Stilwell made it a top priority to open the Burma Road again and ordered a road to be constructed from Ledo in India to meet up with the Burma Road at the Chinese border. Work on the Ledo Road was started on the 16th of December 1942.

The campaign to open up the Burma Road was started in 1944 when the Chinese Expeditionary Force (before known as Y-force) crossed the Nujiang on bamboo rafts and American supplied inflatable boats to recapture western Yunnan (See the battle at Songshan Mountain) while the Chinese X-force army worked its way up from India.

The first supply convoy reached Kunming again on February 4, 1945 over the reopened Burma Road now named Stilwell Road. Soon this convoy was followed by nearly 26,000 army trucks and Jeeps (and 6500 trailers) that stayed in China to improve logistics there.

A system of fuel pipelines got functional as well that ran parallel to the Burma Road. More than 11 million litres of fuel was supplied in the last two months of the war for use in planes and trucks. Until than trucks in China had been running on locally produced alcohol and wood gas and fuel flown in over the Hump. Until this pipeline supplied fuel the planes flying the Hump had to carry fuel for the return flight back from Kunming to India as well thus limiting their freight capacity.

The Nujiang spanning Huitong Bridge in its 1951 rebuilt state. Now no longer used but preserved as a monument.
Return to top of page 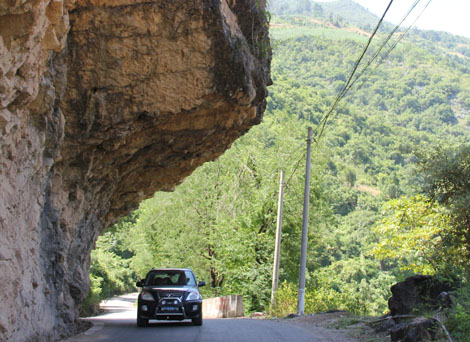 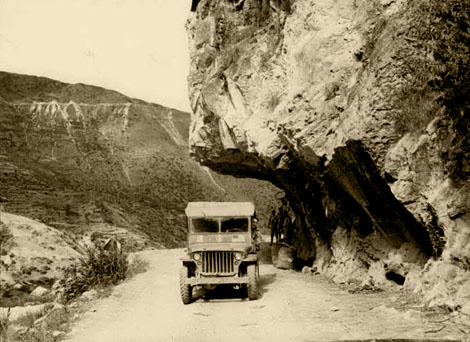 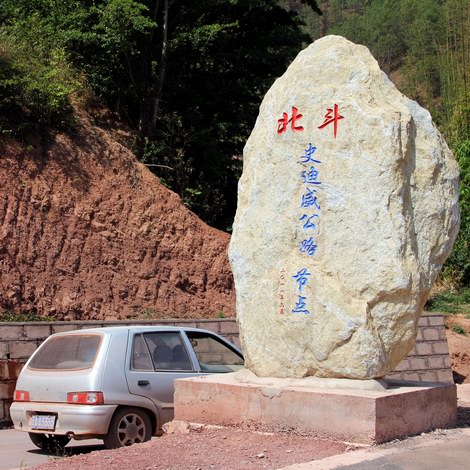 Only recently signs pop up indicating the road. This stone, at Beidou village, indicates the Stilwell road.

The G56 motorway being extended to the border town of Ruili now the main gateway into Burma/Myanmar. (Photo 2012)

The Burma Road as supply road for the allied forces stopped to function as such at the end of WW-II when this back-door access to China was no longer needed. The Chinese civil war closed the door further down also it was a way out for some of the Kuomintang armies. 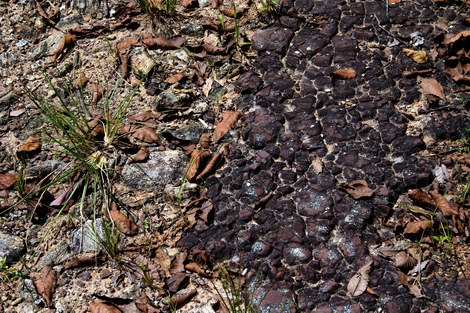 A trace of tarmac indicating that this now abandoned piece of the original Burma Road was ones important.

As part of the 'China Western Development'

policy new roads are developed and ones sleepy market towns like Longling, Mangshi and Ruili, in the minority dominated west of Yunnan, are now becoming boom towns. And finally, after a hundred years, a rail link is being build to Myanmar.

The old Burma Road is nearly forgotten. But not by us.

© burma-road.com holds the copyright on all pictures, clips, text and maps used on this website unless otherwise indicated. (2007 - 2023).