A crashed CNAC plane across the Gaoligongshan mountains

Pianma is a remote village on the border between Yunnan and Burma (Myanmar). There is only one road to Pianma that crosses the Gaoligong Mountains through the "Wind and Snow" pass at 3153 metres (10344 feet).

The Pianma area has a special climate that is a mixture of the Himalayan Alpine climate in winter and tropical monsoon climate in summer.

Pianma played a role in the border dispute between Britain and China and lay in the route of the "Hump" flights during WW-II. 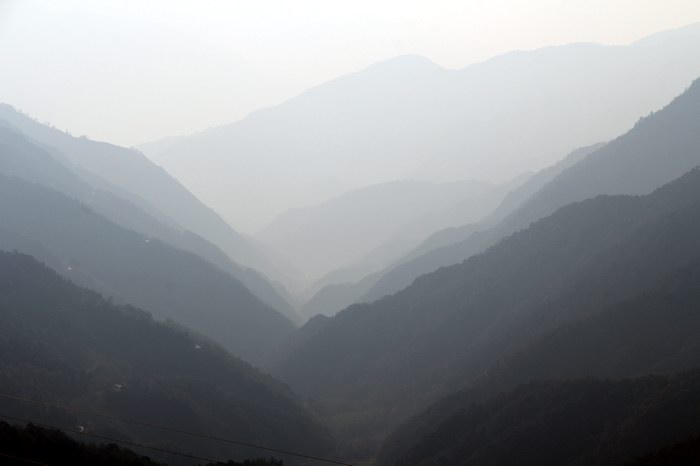 Morning mist in the Gaoligongshan.

Morning mist in the Gaoligongshan.
Return to top of page 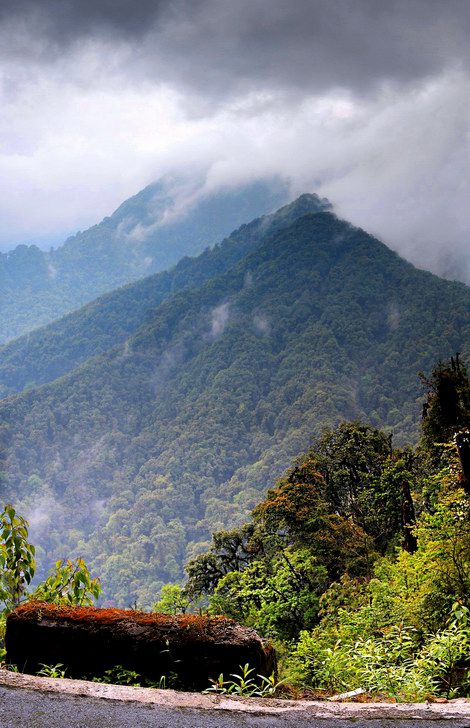 On the way to Pianma one passes the 'Yaojiaping virgin forest' in the Gaoligong Mountains, a dense forest with old Chinese Hemlock trees.

Apart from the special nature in the Gaoligong Mountain range Pianma has two small museum dedicated to historic events in the area.

CNAC #53 in its own museum in Pianma.

The "Nujiang Tuofeng Aerial Line Memorial Hall" housing "CNAC #53" the rebuild Douglas C53 of the China National Aviation Corporation which took part in the "Hump" flights to transport war supplies to and from China.

The "Pianma Anti British Victory museum" dedicated to the border dispute between colonial Britain and China known as the 'Pianma Event'.

The Pianma area has a special feel. The nature is different from other parts of Yunnan and the town itself has a special border-town feel. 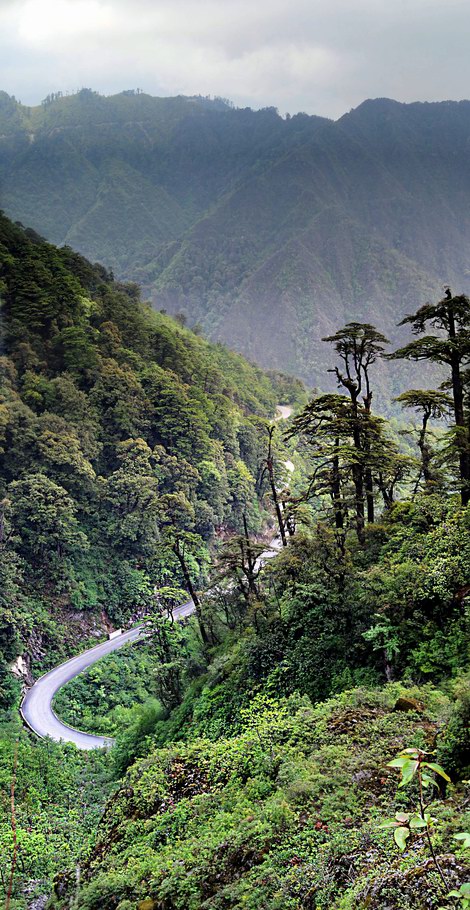 The road winding through the Gaoligong Mountains. 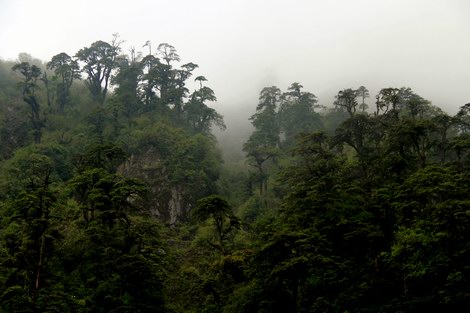 The Chinese Hemlock trees covered in mosses rise well above the other trees in the Yaojiaping forest give the landscape its special character.

The road rises slowly from the Nujiang valley bottom for 2300 metres to the "Wind and Snow pass" at 3153 metres. From there it drops 1190 meters down to Pianma town. Most of the road is smooth tarmac but the highest part through the pass is cobble stone. The pass is often windy and can be covered in clouds. In winter the pass can be snowed in.

The road creates a special challenge for cyclers with long climbs rewarded by long descends. The cobbles near the top add to this challenge.

The total distance between Lushui and Pianma town is nearly 95 kilometres.

Cyclers be aware that the pass can be very cold and windy, as the name already indicates, even in summer. 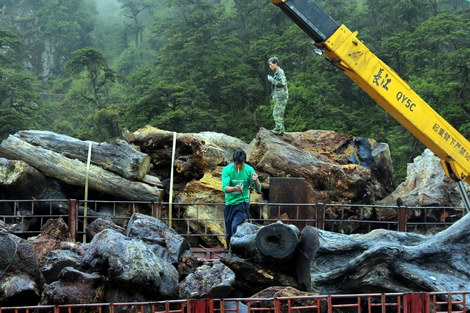 Pianma town is the centre of a lively trade in big tree stumps coming from Myanmar. These stumps are used in China to make tea tables.

There is a constant stream of mineral ores coming from across the border but as well all kind of items used in Chinese traditional medicines. It is doubtful of all this trade is legal. Pianma is a town full of big and expensive four-wheel drive cars with strange number plates.

Foreigners are not allowed to cross here into Myanmar because the area on the other side of the border is controlled by a group in rebellion to the Myanmar central government. 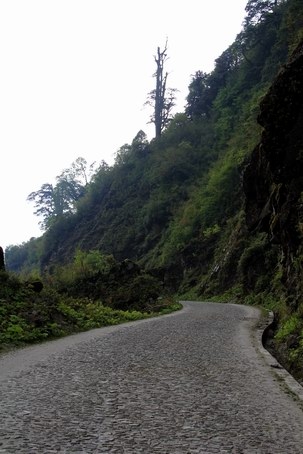 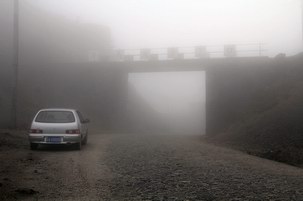 The road to Pianma at higher elevations is made of cobble stones which makes the going slow and noisy. The road goes through a kind of gate at the "Wind and Snow" pass at 3153 metres (10344 feet). Often the pass is in the clouds and in winter it can be blocked by snow. 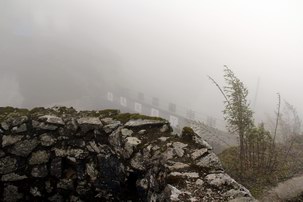 The pass ones was the border between China and Burma. The army base there now is abandoned and so are the Japanese pillboxes (Photo) that once housed anti aircraft artillery there to stop the "Hump" flights. 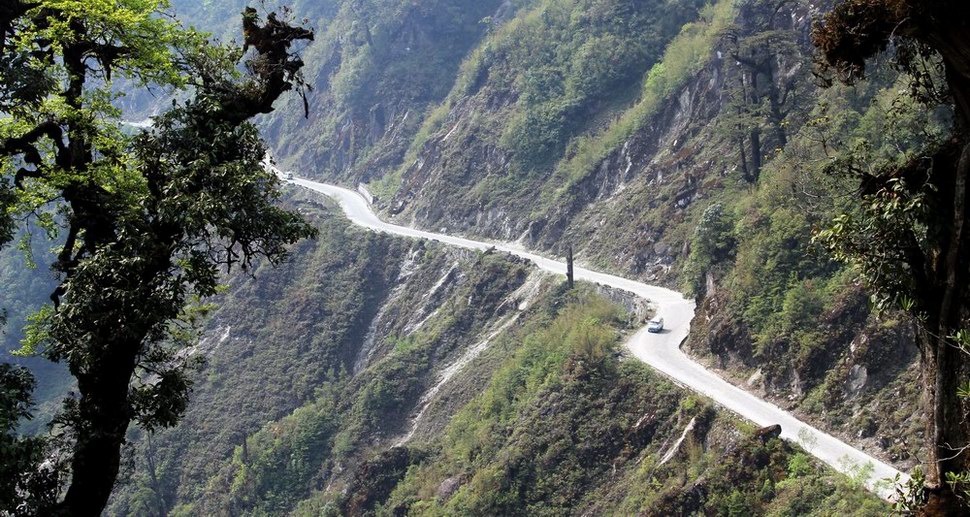 The road through the Gaoligongshan mountains.
Return to top of page

On March 11, 1943, the China National Aviation Corporation's Douglas C53 Skytrooper with registration #53 crashed due to bad weather in the Gaoligong Mountains near Pianma.

The plane, together with two others, was forced to take the southern route back to India due to bad weather further north. The weather in the Pianma area was not good either and one of the planes got caught in a downdraft and crashed into the mountain side as witnessed by the others.

The full name of the museum housing CNAC #53 in Pianma.

CNAC #53 inspected by some visitors. 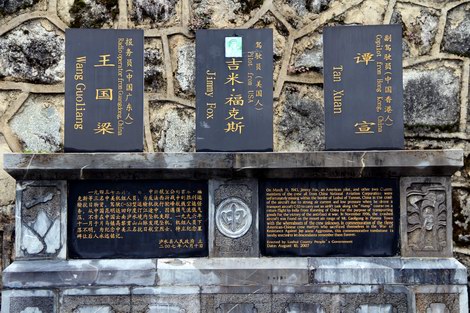 The monument dedicated to the crew of CNAC #53 who all died in the crash. Located next to the museum.

From the air the plane didn't look to much damaged and there was still some hope on the survival of the crew of three: flight captain Jimmy Fox from the USA and his co-pilot Tan Xuan and radio operator Wang Guoliang both Chinese. However the area in which the plane had crashed was under Japanese control and inaccessible. All three however had died.

After the liberation of Western Yunnan at the end of 1944 friends and colleagues of captain Fox; Red Holmes, Fletcher Hanks and Steve Kusak tried to reach the plane of which the location was known. However the area was so inaccessible and the going so slow that the expedition ran out of supplies and returned back after nine days. Even one of their mules with supplies (And the films they had shot) ran off.

The plane got forgotten except for Hanks. He kept on looking for ways to get to the plane. In 1997 he finally managed to reach the plane at the crash location (See Reading suggestion below).

Since then the plane has been moved in bits and pieces to an especially constructed hall in Pianma where it was reconstructed (See picture).

Due to a dispute with a group of businessmen who paid for the recovering operation the right wing and some other parts of the plane are not in Pianma. They have been on public display in Kunming but are now in a private collection. It is hoped that these parts ones will join the plane again in Pianma.

The plane had been damaged and plundered of its valuable cargo of tungsten and zinc by a Burmese rebel group.

The transport out of the mountains added to the damage and the plane was not more than a heap of scrap aluminium when it arrived in Pianma. Later this let to speculations that this was not CNAC #53 but an USSR build Lisunov Li-2 of which there were many in China. Diego Kusak the son of Steve Kusak collected photographic proof that the crashed plane and the plane in Pianma were the same and were a C53 and not a Li-2. (See "counetrfeit story" below in Web suggestions).

A lot of confusion occurred as well due to the disappearance of the original CNAC markings. The paint has faded away over time and the lower layers with American markings are visible again. The CNAC markings on the bottom of the wing are on the missing right wing. The Chinese style restoration which pays more attention to appearance then to authenticity didn't help either (the old American markings are removed with an angle cutter) but none the less the museum in Pianma is a rare attempt in China for the preservation of history. 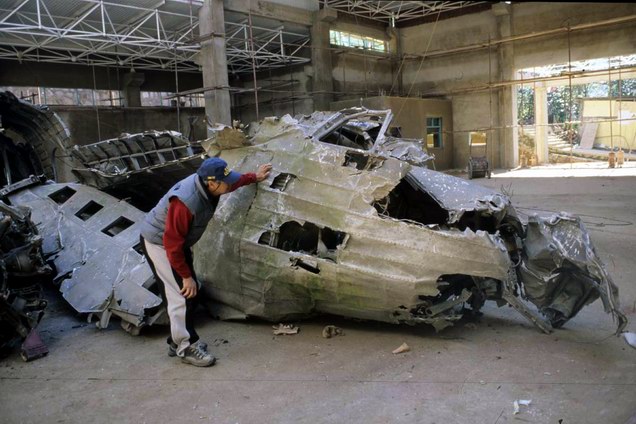 The plane when it just arrived in Pianma (©1).

It took years and many disputes to reconstruct the plane in the specially build hall in Pianma. But finally the exhibition hall could be opened. 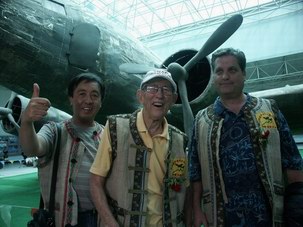 Guest of honor at the opening seremony of the museum From left to right: Ge Shuya (Yunnan Historian), Fletcher Hanks, Diego Kusak (©1).

The plane got painted in 2014 in an attempt to make the new parts blend in better with the rest of the plane.
Return to top of page

Map indicating what was at stake during the Pianma Event. 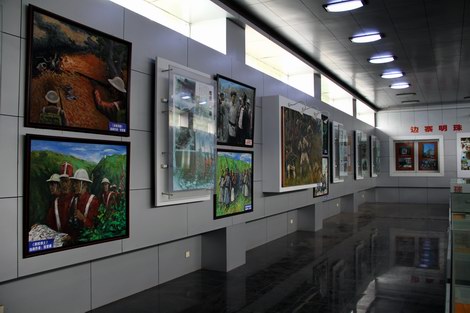 The other museum in Pianma is the curiously named Pianma Anti British Victory museum dedicated to the "Pianma Event". The victory only came some fifty years after the event when the Pianma area was handed over to China by the Burmese dictator General Ne Win, who didn't control the area anyway, in exchange for Chinese weapons.

The Pianma Event in 1910 was an uprising against the Burmese British colonial rulers in what started as a tax dispute. The heavy handed British action to gain control over the Pianma area set much bad blood by the Jingpo, Lisu and Drung tribes who live on both sides of the border. Request for help to the Qing emperor did lead to diplomatic protests but didn't lead to practical support and the border was fixed at the top of the Gaoligong Mountain range.

Pianma was the first disputed area to be handed over to China and China finally had a victory. To commemorate this event a monument and a museum were erected in 1986.

Also much related to the Pianma Event is unclear, and not clarified either, the museum is interesting in the way Chinese depict history.

Much more on the CNAC

can be found on their web page.

Chinese TV made a documentary on CNAC #53

which focuses mainly at the counterfeit story. 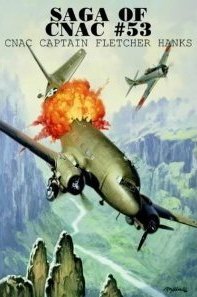 The Saga of CNAC #53 describes the story of the plane now at the Pianma museum and the history of CNAC. It is written by captain Fletcher Hanks who was a friend of Captain Jim Fox who died in the crash of the plane.

A review of the book describes it as follows: "His first-person account of the 1997 expedition (to the plane) provides the foundation of the book, but his background information on, and reminiscences about, CNAC's contributions to the airlift itself are fascinating, often funny, sometimes unsettling, and . . . invaluable".