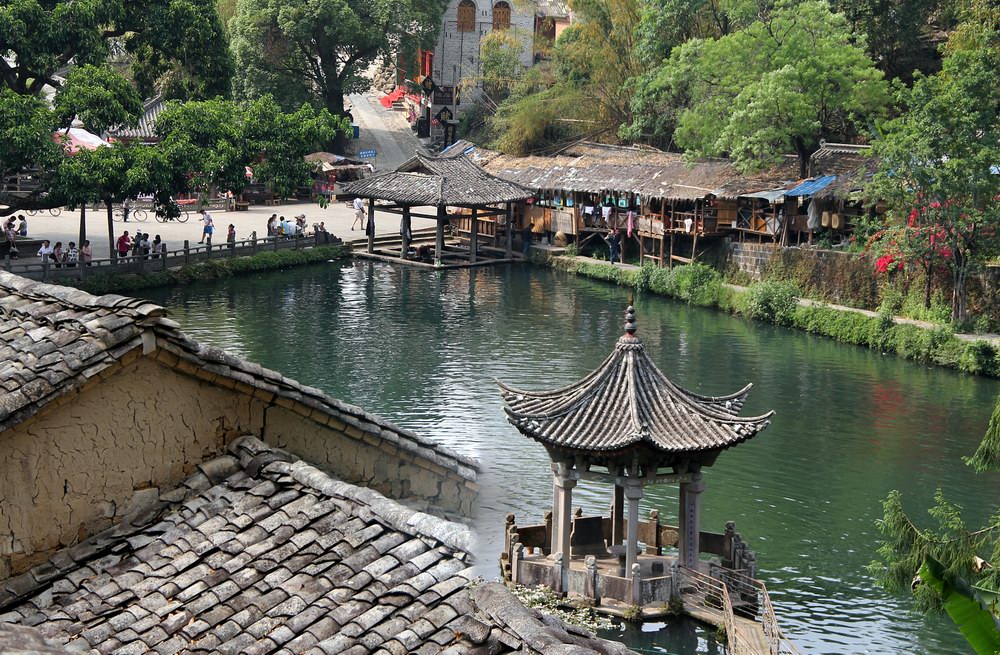 Ancestral temples and an old library.

Ancestral temples and an old library.

The preserved village of Heshun (和顺 Pinyin: Héshùn) is a popular tourist destination and also mass tourism has taken over there is still a lot of atmosphere, this especially ones the tour busses have gone in the afternoon and before they arrive in the morning. It is therefore recommended to stay overnight in the village.

Heshun prospered from trade with Burma and from the many overseas descendents that have still family in the little village. Money sent by them for instance made it possible to build a public library and several ancestral temples and family mansions.

Heshun has a museum dedicated to the Chinese communist philosopher Aisiqi. 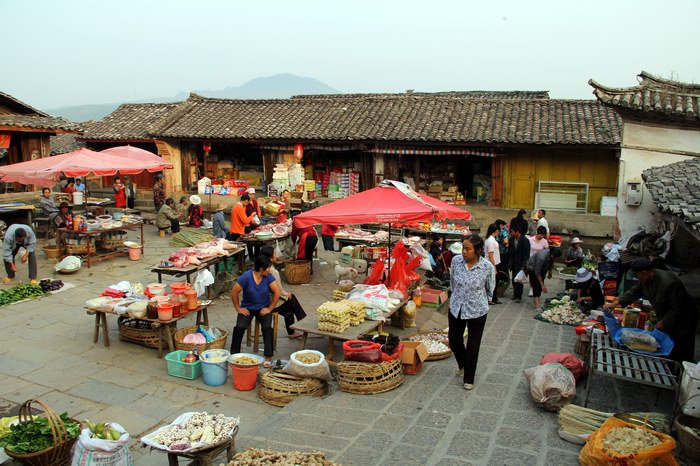 The morning market in central Heshun is always a lively affair.

The morning market in central Heshun is always a lively affair.
Return to top of page 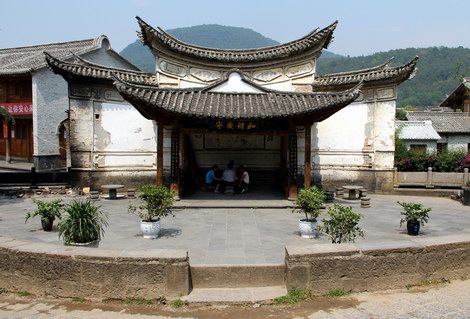 The central meeting place in Heshun.

The most prominent spots along the river have been taken over by newly constructed old buildings selling the usual tourist stuff and jade, the specialty of the area. Ones passed this one can turn left around the big reservoir to the ancestral temples and the Aisiqi museum, or turn right to the old library and the 'Yunnan-Burma anti Japanese war' museum. Going straight brings one in the old village with its narrow cobbled alleyways. Cars and busses stay in the parking lot just in front of the village. Inside the village most motorised transport is by motorbike also some locals use a car, most however just walk. The village has an area entry of 80 RMB/person. 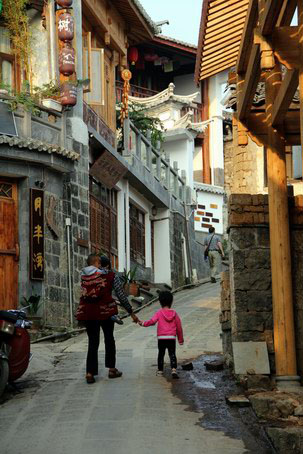 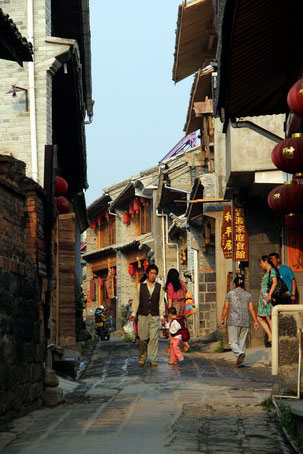 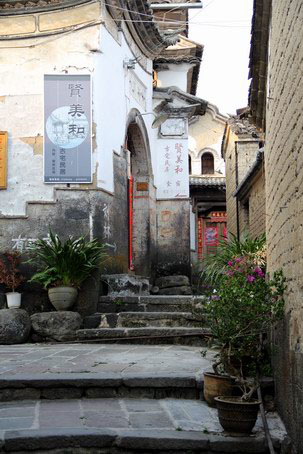 Morning in Heshun; the kids are brought to school, some early tourists start looking for something to eat in the still sleepy village.
Return to top of page 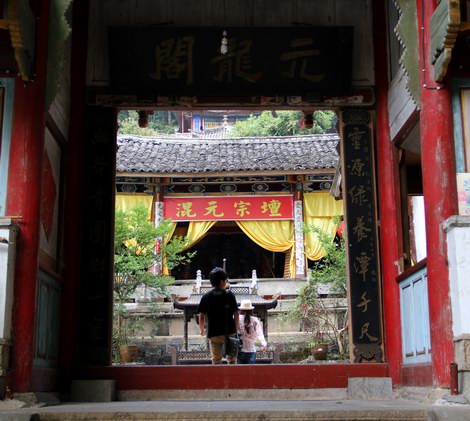 Entering an ancestral temple in Heshun. 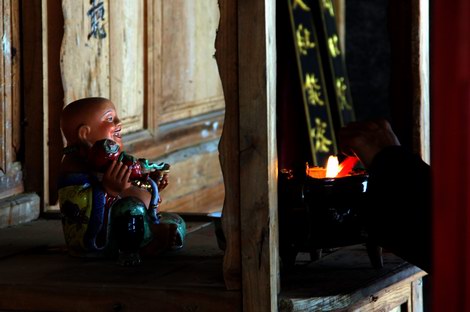 Inside one of the ancestral temples in Heshun.

There are three large ancestral temples that have been built with money sent back by Heshun villagers that sought and found their fortunes elsewhere. This resulted in larger than usual and rather elaborate constructions.

Also some of these buildings have been used for other purposes like tea house. They are now, or already have been, restored to their former glory.

All three of them are build into the hillside next to the village and are overlooking the reservoirs that provide water to the fields below the village.

The three ancestral temples are:

All temples are Daoism based with Buddhist influences. This mix is quite normal in Yunnan. 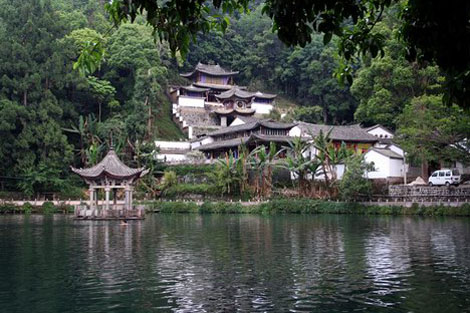 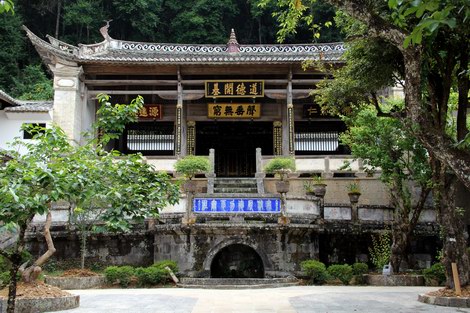 Dao De Kai Ji ancestral temple ("Morals are the base of the family" temple).
Return to top of page 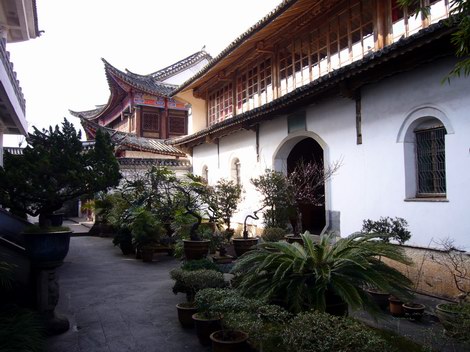 Completed in 1928 and containing about 60,000 volumes it aided the spiritual development of the people of Heshun in this isolated and rural part of Yunnan.

The library was largely paid for by overseas members of the Heshun clans and it contains rare copies of Chinese books of the time.

The building was very modern at the time with its large windows to let light in.

In 2012 the library, suffering from woodworm, underwent an extensive renovation. 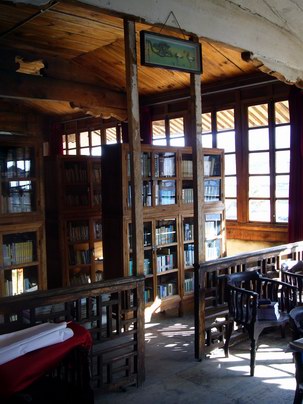 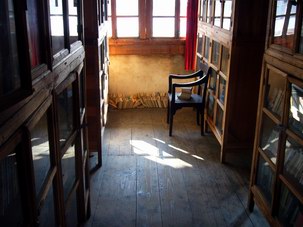 The interior of the Heshun library as seen in 2008. The upstairs part has reading corners and the serene quietness of a proper library. It was so quiet that one could hear the woodworms doing their destructive work. 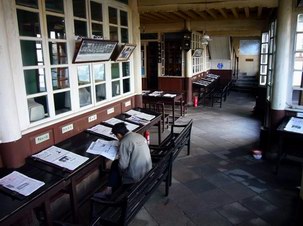 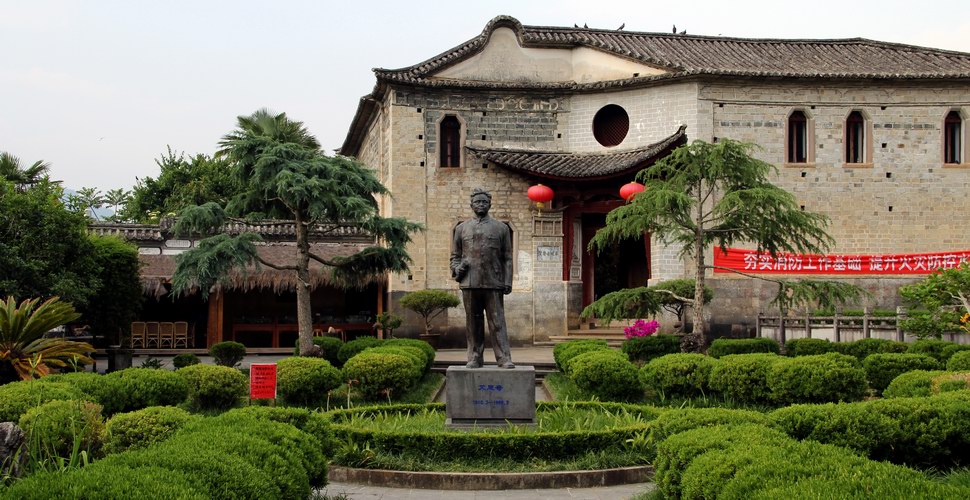 Statue of Aisiqi in the outer courtyard of his house in Heshun. 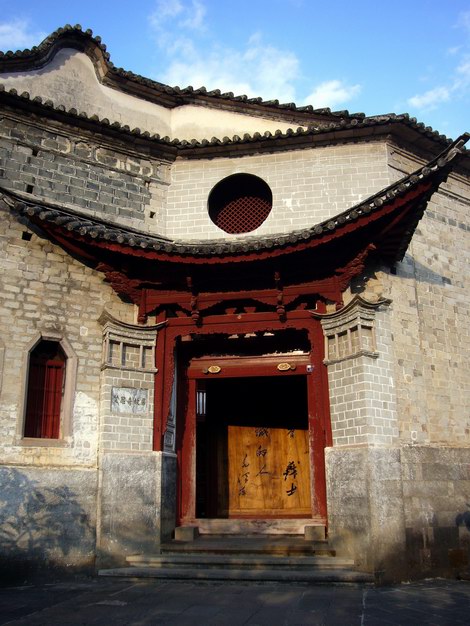 Aisiqi was born in Yunnan, later he moved to Hong Kong, where he studied English and French at a Protestant school and was exposed to Sun Yat-sen's "Three Principles of the People" and Marxism.

He read a great deal of Marxism, including the "Communist Manifesto" . This reading is the root of Aisiqi's most important works Historical Materialism and Dialectical Materialism (歷史唯物主義與辯証唯物主義) and Philosophy for the Masses (大眾哲學)(1948).

A small museum dedicated to the life and work of Aisiqi is located in the house in Heshun where he lived for two years.

The museum contains personal effects and pictures of Aisiqi and his wife. Especially impressive are the very long but very detailed pictures of communist party conferences that Aisiqi attended. The outside yard has a statue of Aisiqi. 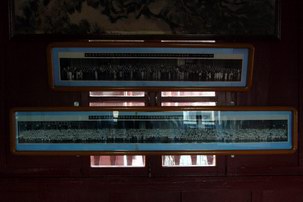 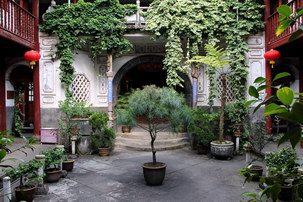 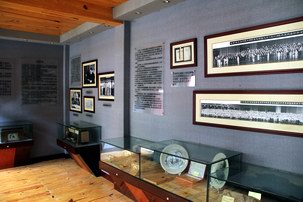 Inside the Aisiqi museum in Heshun. The place gives a nice insight into the communist nobility.
Return to top of page

The Wanlouzi (弯楼子) or Wan Family House is now the "Heshun Residence Museum". It still has the original kitchen in one of the courtyards.

The house was confiscated during the revolution and later ransacked by the Red Guards but still is a nice example of an upper-class residence. 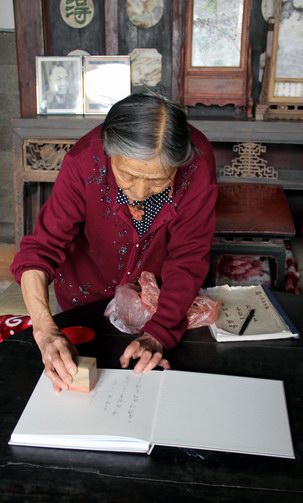 The daughter of the former owner lives again in the back of the house and can tell many stories related to the house. On request here she signs and stamps a book about the house.
Right Below an overview of family portraits. 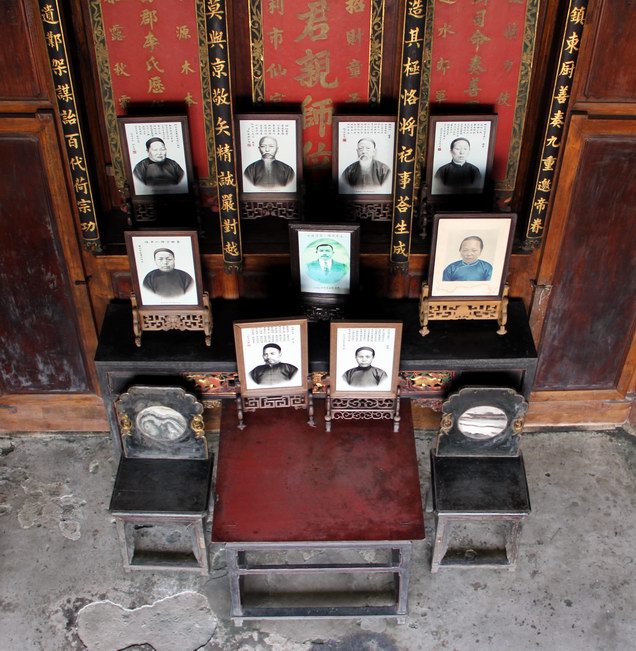 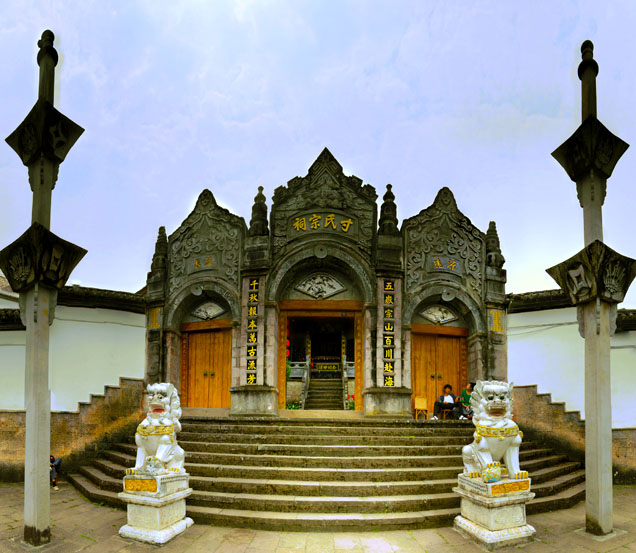 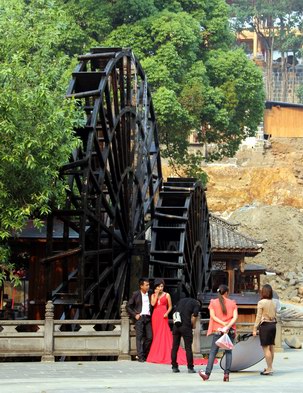 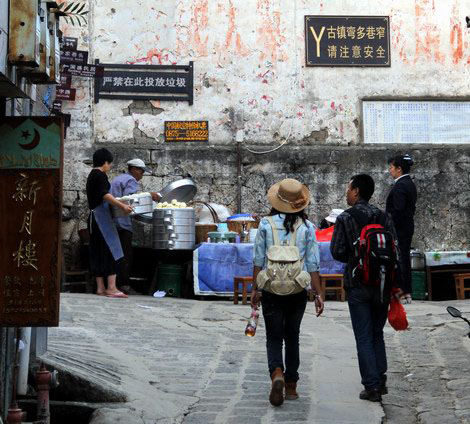 Looking for breakfast in Heshun village.

During the day there is plenty of Chinese snack food available for the visitors that come for the day to Heshun.

Some guesthouses offer food as well. 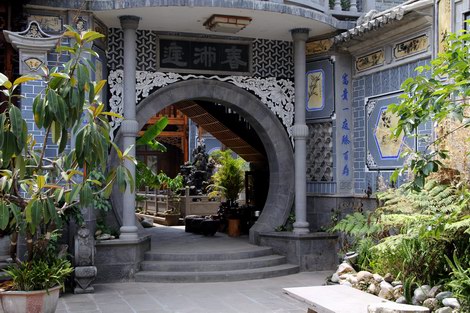 There are several guesthouses in Heshun. Most are very small with only a few rooms. Most guesthouses are full of atmosphere and the fact that Heshun is largely car free keeps out the hordes of tourists. This means as well that one has to carry ones stuff up to the guest house.

Most guesthouses are newly build traditional houses with high level of facilities. 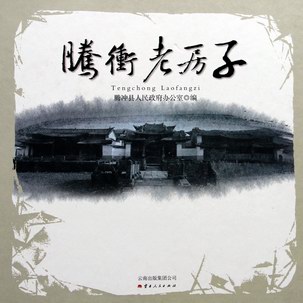 It describes the Library, the Ancestral Temples, Aisiqi's house and the Wanlouzi.

The book has many pictures of the excellent wood carving work found in these old buildings.

Models of old military vehicles that were sold at the museum.

One of our favourite little museums, the "Yunnan-Burma anti Japanese war" museum that was located in Heshun was closed in 2014. The collection has been moved to the new National Museum in nearby Tengchong.
Return to top of page