From pack-horse caravans to air transport.

From pack-horse caravans to air transport.

The old airbase along the Burma Road

Yunnanyi (云南驿), a now nearly forgotten village along the Burma Road ones was an important location in Yunnan.

In the last ten years Yunnanyi has undergone several renovation and preservation works and is the location of two little museums. Both have closed again.

Yunnanyi was an important airbase during WW-II. From Yunnanyi the AVG (American Volunteer Group better known as the Flying Tigers) operated attacks against the Japanese Army coming up the Burma Road and played an important role in struggle over the control of the air in western Yunnan and northern Burma. 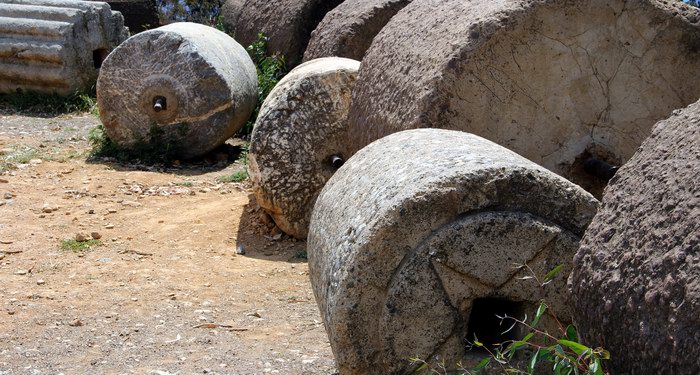 Stone rollers used for the construction of both the Yunnanyi air strip and the Burma Road.

Stone rollers used for the construction of both the Yunnanyi air strip and the Burma Road.
Return to top of page 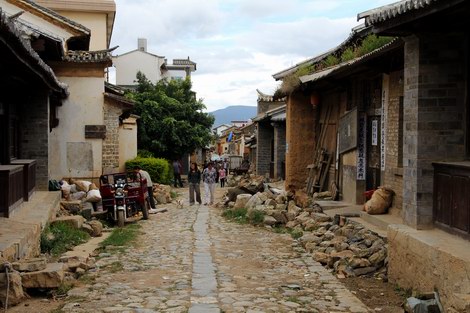 The old mainstreet through Yunnanyi got widened but still has the old cobblestone pavement.

Yunnanyi means 'staging post south of the clouds' and is the origin of the name of the province. Going to Yunnan meant before going to Yunnanyi. The east/west road known as the Southern Silk Road and the north/south tea horse trails going to Tibet and Sichuan all passed the fertile Yunnanyi valley. Yunnanyi was as well laying on the pilgrim trail to the Jizu mountain Buddhist monasteries, home of the golden temple before it was moved to Kunming. The old Burma Road, the modern motorway and the railway line and the high-speed rail all pass now through the valley without stopping. The place that gave Yunnan its name is now mostly know as the name of a piss stop on the motorway, the "Yunnanyi motorway service area". 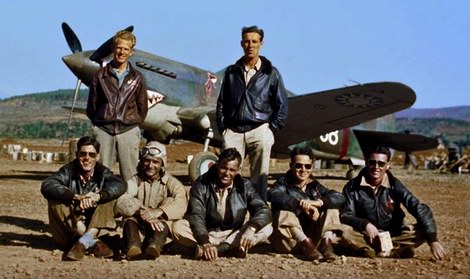 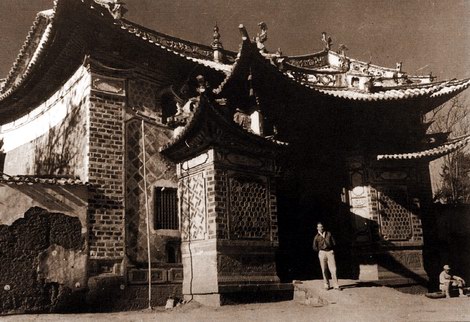 Temple in Yunnanyi used as radio station for the early warning system set up by Chennault and the AVG. (©2).

Yunnanyi was the base of the Flying Tigers (AVG) and later on the American Fourteenth Air Force near the occupied western part of Yunnan. The base in Baoshan was near the front line and therefore not protected by the early warning system set up by Chennault. Yunnanyi was protected by this early warning system and therefore the fighters could operate more effectively thus making Yunnanyi the main base in western Yunnan. The base played a role as well as fighter base for escorts that could accompany transport planes flying "the Hump" when they had to take a southerly route due to bad weather.

The Yunnanyi strip got abandoned at the end of WW-II and flight operations were moved to a new airbase nearby that was build during WW-II for use by B29 bombers and Yunnanyi became a sleepy village again.

Yunnanyi airbase got reused again in recent years but now as a base for surface launched missiles.

In Yunnanyi there is the "Transportation museum of the China-Burma-India theatre in WW-II" dedicated to the airbase and the Burma Road passing the village. Find more information on this museum below.

The revetments that were build to protect the planes but as well ammunition dumps can still be seen in the fields in front of Yunnanyi. 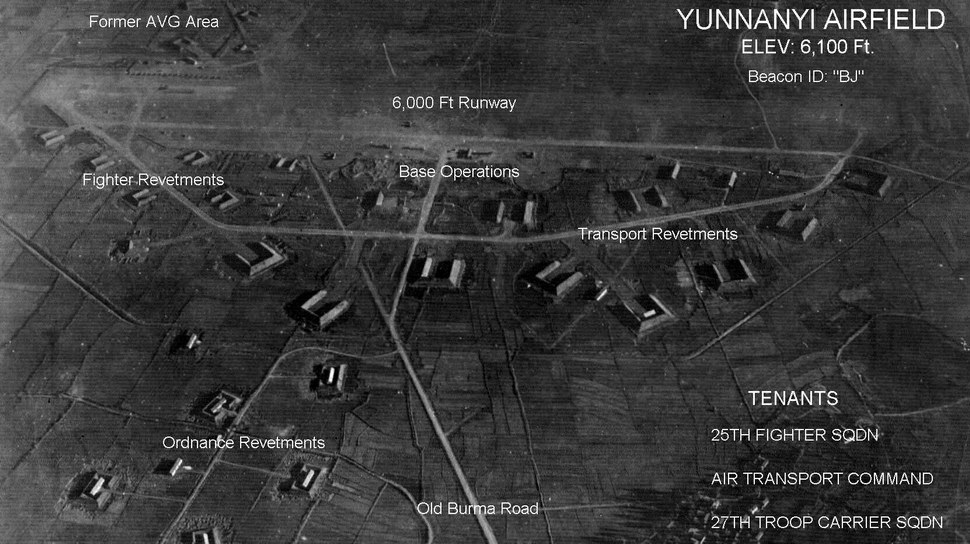 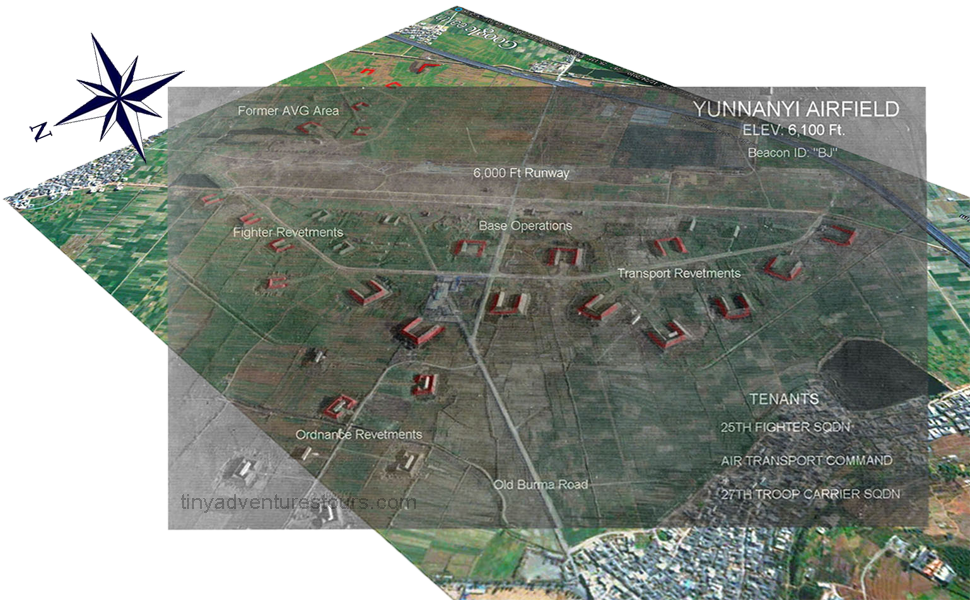 Above aerial view of the Yunnanyi airbase as overlay over a Google earth map. In red the revetments that still can be seen on Google Earth. 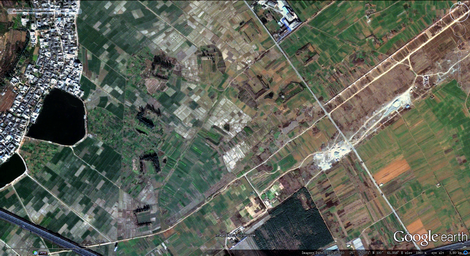 The U shaped revetments (protective earth walls) can still be seen from the air and on the ground (Left) (Above). Some are covered with eucalyptus trees. They show up as well in programs like Google Earth (Screenshot: Google Earth).

The diagonal line in the picture is the air strip. It can no longer be seen on the ground but shows up in aerial picture.

The revetments seen in September when the ground is covered with vegetation.

The revetments seen in spring. The leaves of the eucalyptus trees growing on the revetments have been harvested for essential oil extraction.

The revetments seen in May when the ground just has been ploughed.
Return to top of page 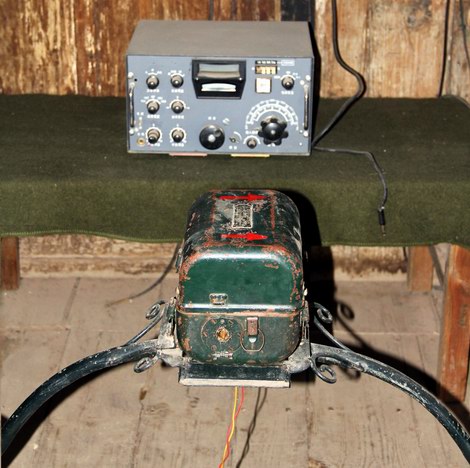 These American radios and hand operated electric power generators were used in the early warning network that was set up by Chennault for the Chinese air force. This system made the actions of the Flying Tigers much more effective.

This museum, housed in an old tea horse caravanserai, despite its name is mainly dedicated to the Flying Tigers and other American fighter groups based at Yunnanyi. 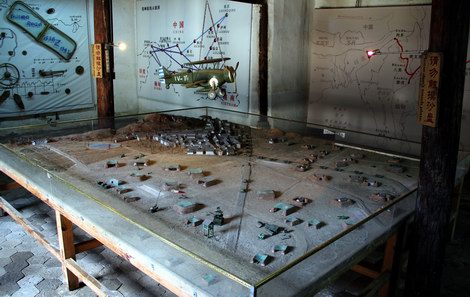 Model of the Yunnanyi airbase at the museum.

The museum at Yunnanyi is a typical Chinese museum with mainly enlarged copies of old pictures. The building itself might be more interesting than the collection.

In recent years the museum got completely rebuild but has not opened again since. 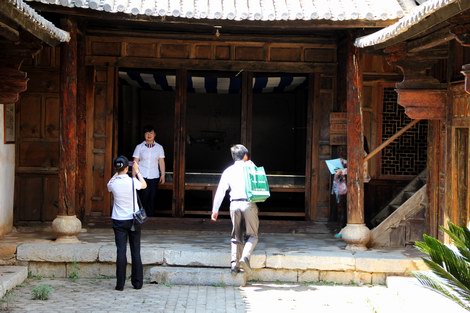 The interior courtyard of the "Transportation museum of the China-Burma-India theatre in WW-II". 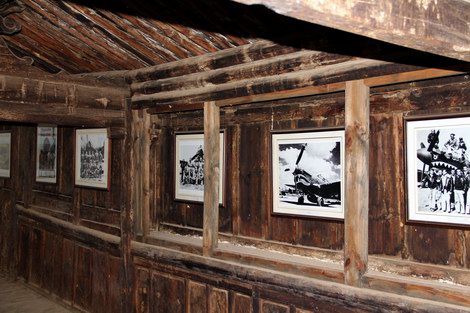 Second floor of the "Transportation museum of the China-Burma-India theatre in WW-II".
Return to top of page 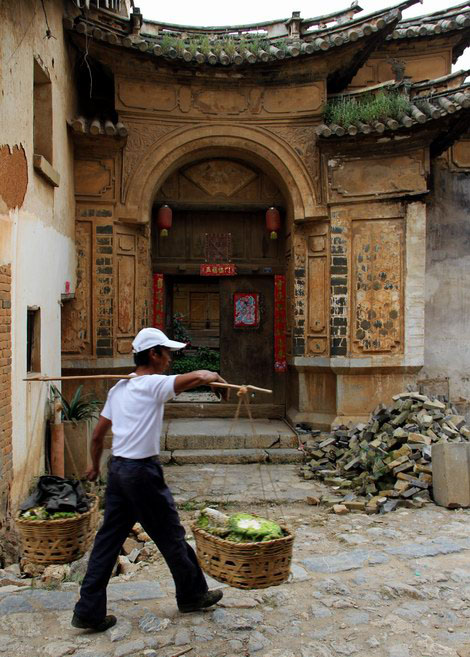 The main houses in the village have impressive gates.

The little village preserved its conservative rural feel despite that Yunnanyi was swept into the reality of WW-II which saw an invasion of American and Chinese pilots and their planes and everything that belongs to that. That rural feel is still there. The "modern" Burma Road that by-passed the village is now full of ugly buildings but the old main street with its traditional houses with impressive gates is still there. 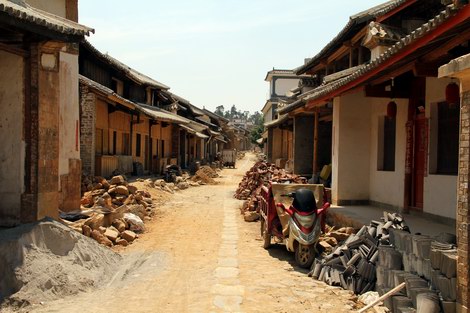 Some years ago a preservation and restoration project was started. Also this is done in the typical Chinese way which does little honour to the original but this project is probably better than nothing. The main building material traditionally used is rammed earth and adobe bricks which don't last long without proper maintenance and these buildings have a tendency to fade away. It is hoped that the restoration will not only lead to a row of tourist shops but preserve the spirit of the village as well. 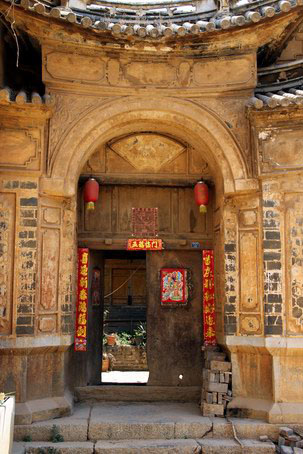 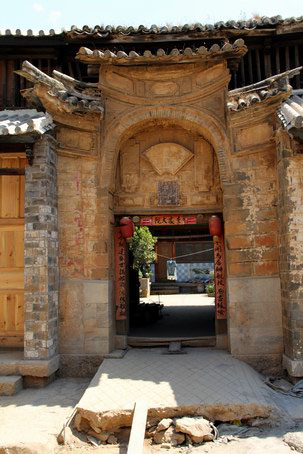 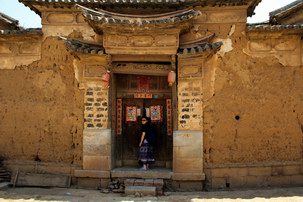 The main feature of the capital houses in Yunnanyi are their gates. A lot of them however are in need of maintenance.
Return to top of page

Part of the Yunnanyi conservation project is the curiously named "Yunnan horse caravan cultural museum". Based in an old caravanserai the museum tries to give an impression of how horse caravans were operated.

Like most things in Yunnanyi this museum in a work in progress, also progress is not very fast. For the last couple of years this museum has been closed. 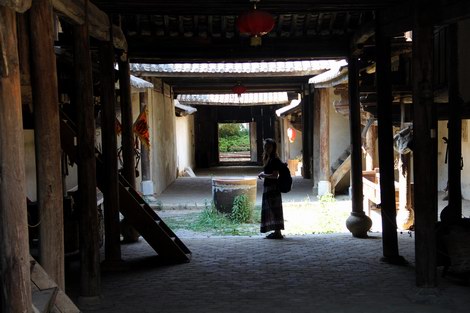 The central courtyard in the "Yunnan horse caravan cultural museum". 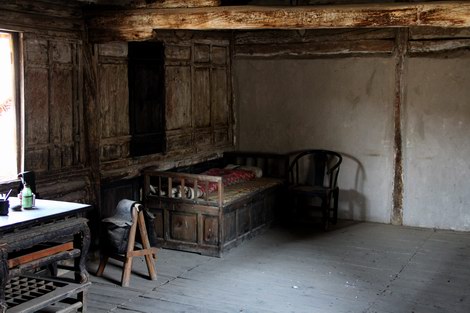 Room of the owner of the caravanserai. 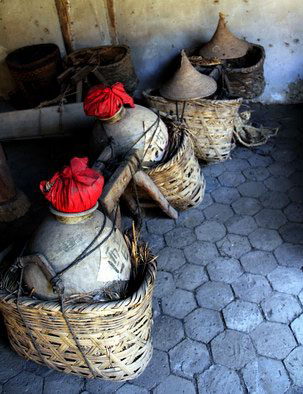 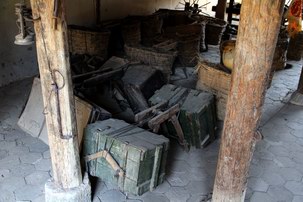 Traditional Baijiu containers (Left) (One pictures up) and ammunition boxes tied to pack saddles (Above). 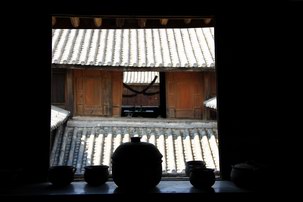 View from the window at the caravanserai owner's room.

Yunnanyi is one of the places in Yunnan that is frequently used as a movie location. This especially for movies set in the thirties and forties. In January 2014 Yunnanyi was used for a movie about a bandit turned freedom fighter turned good communist.

The old parts of the village where used for outside shots while the "Yunnan horse caravan cultural museum" and the "Transportation museum of the China-Burma-India theatre in WW-II" were used for interior shots. 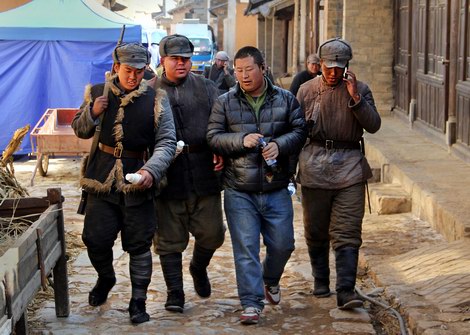 The director and some cast members. 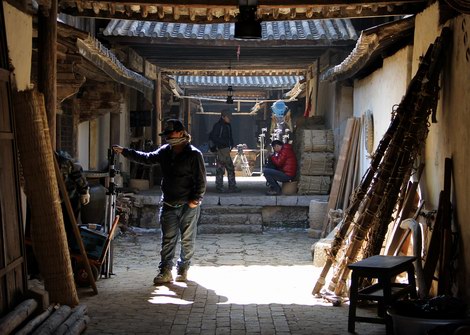 Interior shots at the caravanserai.
Return to top of page

At the central temple complex at Jizushan there is a replica of the golden temple, the original temple was moved to Kunming. 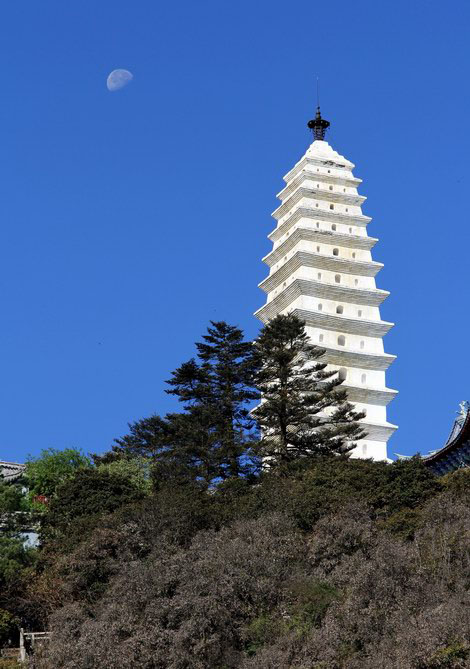 The main pagoda at the top of the Jizu Mountain forms the centre piece of temple and monastery complexes that are located in these mountains.

All over China there are Buddhist and Taoist holy mountains. In Yunnan lay the Buddhist Jizu (Chicken food) Mountains. The Jizu Mountains lay some 60 kilometres north of Yunnanyi and are the main destination for Buddhist pilgrims in Yunnan. Yunnanyi had an important role on the pilgrim trail as well. 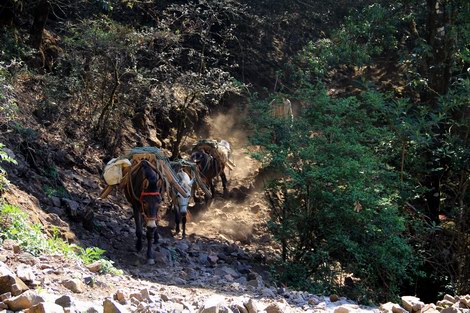 Mules and pack-horses coming down the Juzu Mountains. Pack animals are still in general use in the mountainous areas of Yunnan.

Nowadays people not only travel to the Jizu Mountains for religious reasons but as well for hiking through the mountains. (One can now get up most of the mountain by cable car).

Some visitors stay overnight at the monasteries or at the affiliated hostel at the centre of the Jizu Mountain national park area.

Panorama Yunnanyi. View from the middle of the old airbase towards the village. Note the revetments on both sides. On the hill behind the village one can see the temple where the early warning system was based. Click here for a full-size version.
Return to top of page 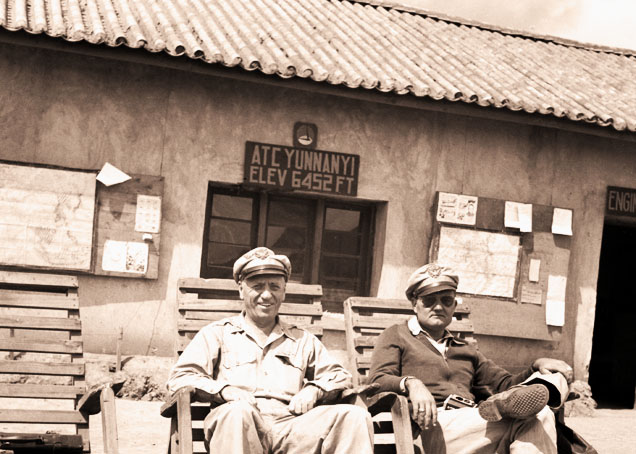 The picture on the left above was given to us by aviation journalist/historian Jon Proctor.

It shows, on the right, his father Col. Willis Heath Proctor, India Commander CBI ATC at the Yunnanyi airbase in 1944.

The strange cut-out of the picture draws the attention to the name plate in the background that states the elevation of the base at 6452 feet. That is actually 22 feet higher than the base is. At a WW-II aerial picture (above) the elevation is stated to be 6100 feet. This is a full 330 feet below the actual elevation. Modern elevation measurements have the base at 6430 feet.

For more on W.H. Proctor and his remarkable career go to his son's website 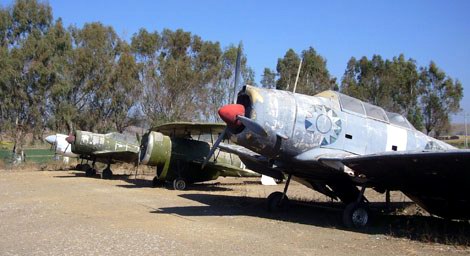 Mock-ups at the Yunnanyi parking in 2008. 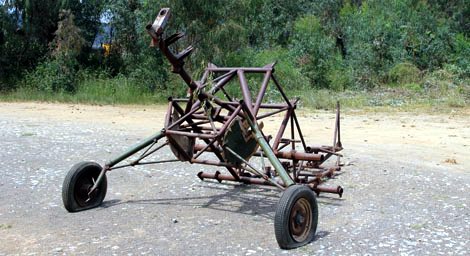 For some time these mock-ups of planes that had been used in a Chinese movie, were parked at the parking lot of Yunnanyi. A lively discussion took place at the internet what these planes were.

but has the retractable landing gear like the Polikarpov I-16

mono plane so must be a Polikarpov I-153

which was an improved version of the I-15.

The planes, build out of metal frames covered with cardboard, have weathered away till only the frames remained and one can see now clearly from these that it were mock-ups (The car wheel landing gear was always a giveaway). Even the last frame was gone by the end of 2012.